Here we are, almost two months after the birth of our little one and I’m finally getting around to posting her birth story and newborn pictures. This was our second December baby and it’s always a whirlwind having a baby right before the holidays. Not only were we adjusting to the new baby but we had Christmas parties and events. There was our oldest daughter’s preschool Christmas program, our middle daughter’s 4th birthday party and the baby’s baptism. And of course, we had our newborn photo shoot and family of five photography session with Kassondra Design. Most of the photos in this post are from that session. 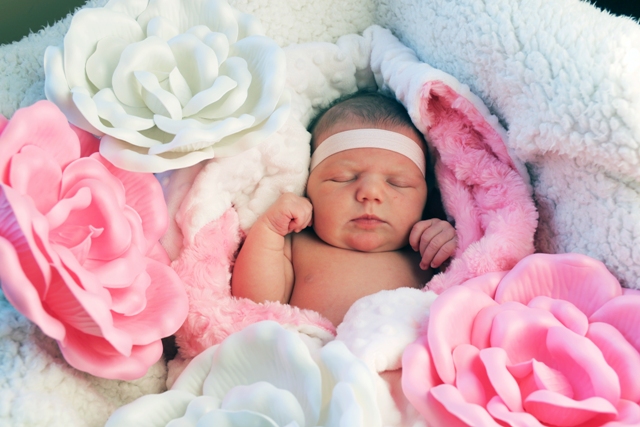 So to say the least, it’s been a little crazy around here and I just feel like I’m starting to catch my breath and return to some resemblance of my previous routine. In some ways, three kids are easier than two and in other ways, they are harder.
Featured on MovingBabies

Getting everyone out the door and on time is more of a challenge. I still have yet to venture to the store with all three of them, although we have gone to the library, the doctor’s office and of course to and from preschool. 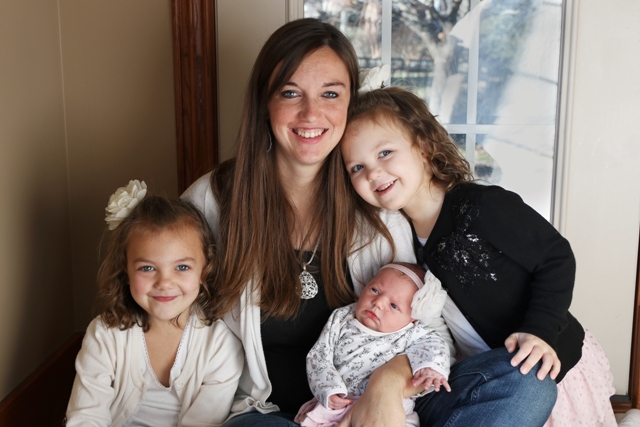 The nice thing about three is that the older two can entertain themselves for the most part and they are much more independent than when I had just two.My older two girls are sixteen months apart so that first year with two in diapers was really rough. This time around with a five-year-old, four-year-old and a baby, it seems a little easier.

The older sisters, Heather and Stella, absolutely adore their baby sister. They basically smother her to death as I like to jokingly say. They came to see her in the hospital the day after she was born and that first meeting was one of the sweetest things I’ve witnessed as a mother. 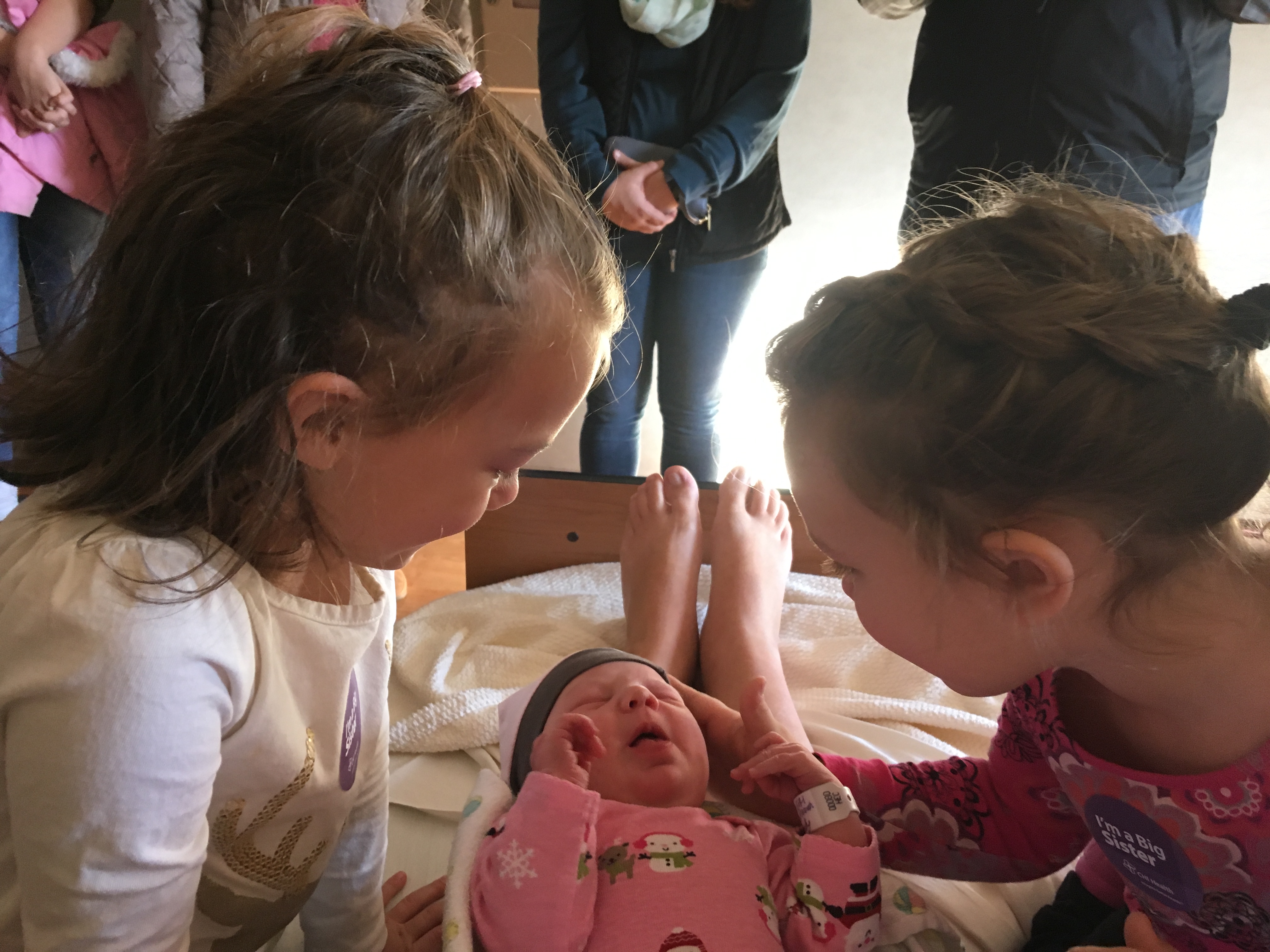 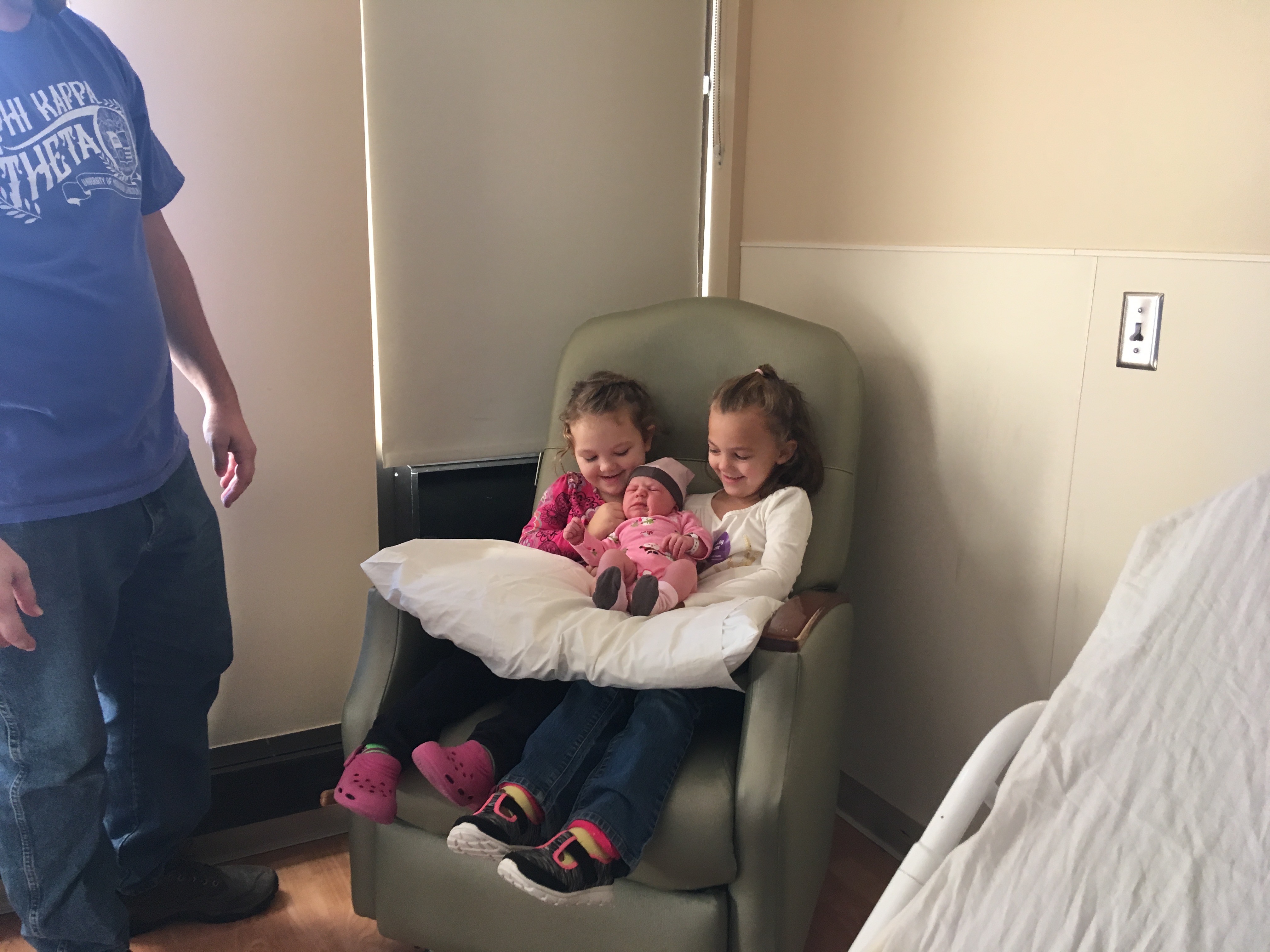 I ended up getting induced two days after my due date. I had been sitting at four centimeters and sixty percent effaced for over a week, but the baby’s head was not positioned quite right so I guess that’s why labor hadn’t started on its own. Normally, I would have just kept waiting but I was feeling the pressure of Stella’s 4th birthday party that was already scheduled for two weeks later.

You can view the short and sweet version of the birth story on my YouTube channel:

Plus it seemed ideal to have the baby over the weekend for logistical purposes. My husband, David, would be off work,  and the older girls would already be settled at Grandma’s house. I wouldn’t have to worry about going into labor in the middle of the night and getting in touch with someone to come watch the girls while trying to reach the hospital in time. (My previous labor was less than three hours and my water broke at home with no warning or previous labor signs). 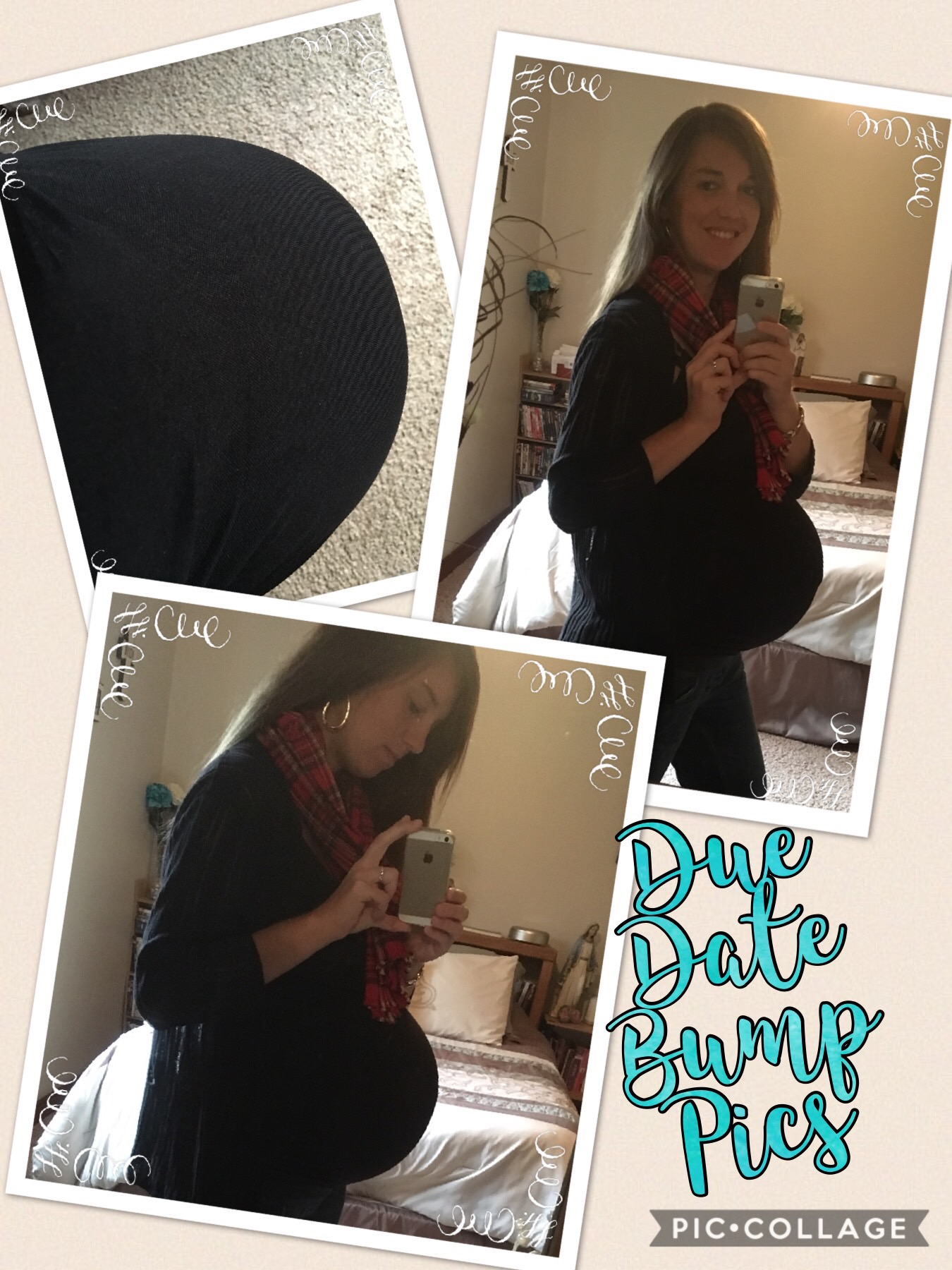 So we scheduled the induction for Friday night at 7:30. Grandma and Grandpa picked up the kids in the late afternoon which gave me a couple of quiet hours to finish up my to-do list at home before heading to the hospital.

They started me on Pitocin once I arrived and apparently I was already having light contractions. For about five hours, the labor progressed slowly and was really easy. The contractions were irregular and barely hurt. I sat on the bed with my husband beside me and we watched a Netflix show while eating mac and cheese. 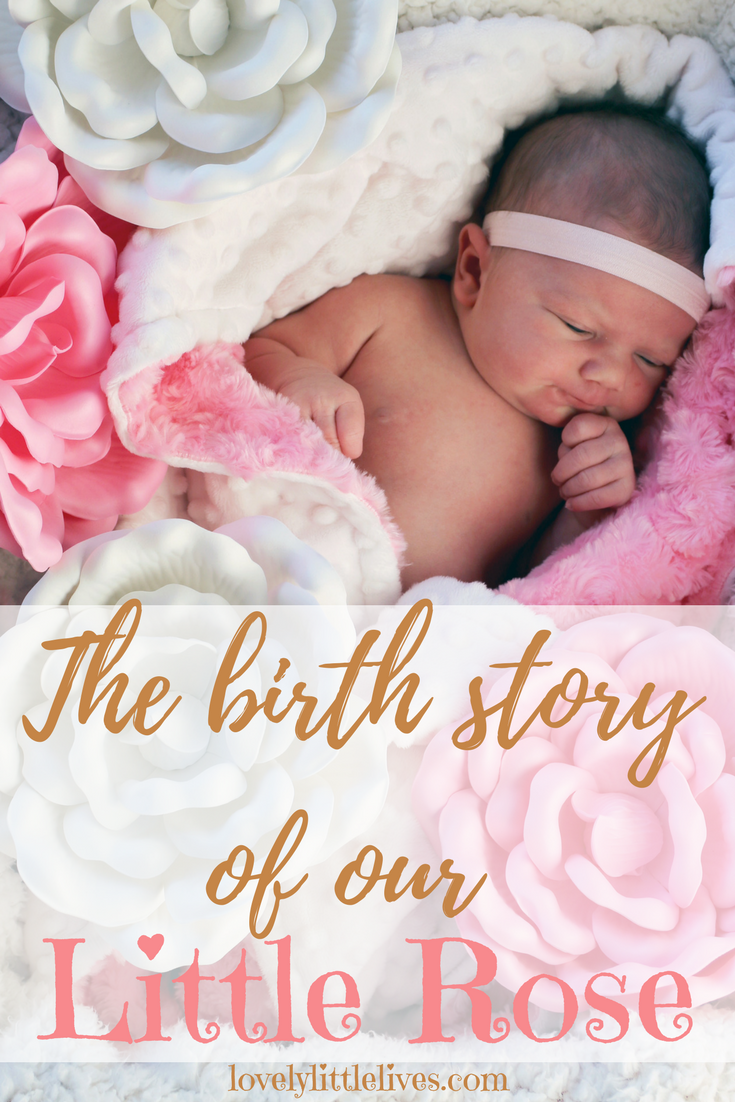 The doctor came in to check me a couple of times and at one point he had me disconnect from the IV Pitocin drip to see if labor would continue on its own. He went to take a nap and my husband and I walked around the maternity ward and helped ourselves to pudding and orange sherbet. The contractions slowed to a stall, so an hour later back to the Pitocin IV I went.

Within the next hour or so, the contractions intensified and I started to actually feel uncomfortable. Still, it was very bearable. At 12:20 am, the doctor came in and checked me again. I was at six centimeters and he was able to break my water since the baby’s head was well positioned by that point.

Once my water broke, the contractions were instantly much more intense. Within minutes, I felt like I wanted to push. I escalated from six centimeters to ten centimeters in less than a half hour and then I was pushing. I always get terrible and constant back labor so by this point, I was in agony mode. They were going to give me an epidural but labor progressed so quickly after my water broke that there wasn’t time. The anesthesiologist was summoned and then sent away. 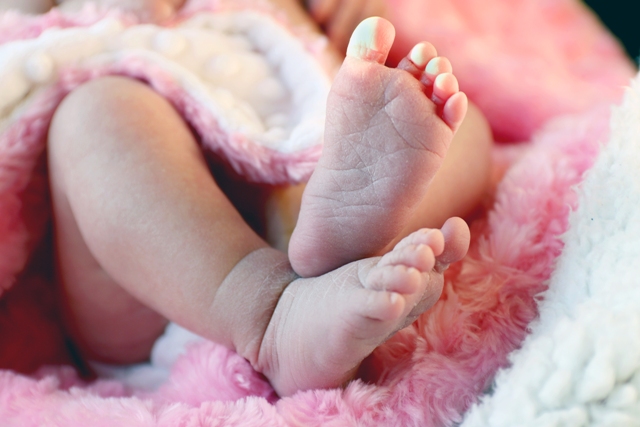 So I had my first delivery without any pain medication and wow was that an experience! I tried pushing on all fours since that seemed the most comfortable with my back labor. But after about five or six pushes, they had me rotate around to lay on my back and push from that position. Apparently, the other way wasn’t working very well.

With my husband on one side, the nurse on the other and me screaming at the top of my lungs, I pushed a few more times, maybe five at the most. I don’t know how many times I said, “I can’t do this,” while the doctor was responding “Yes, you can, I see her head, you are almost there.” And then after what felt like an eternity of searing pain, the worst pain I’ve ever felt, and clutching David’s arm as hard as I could, she was born. 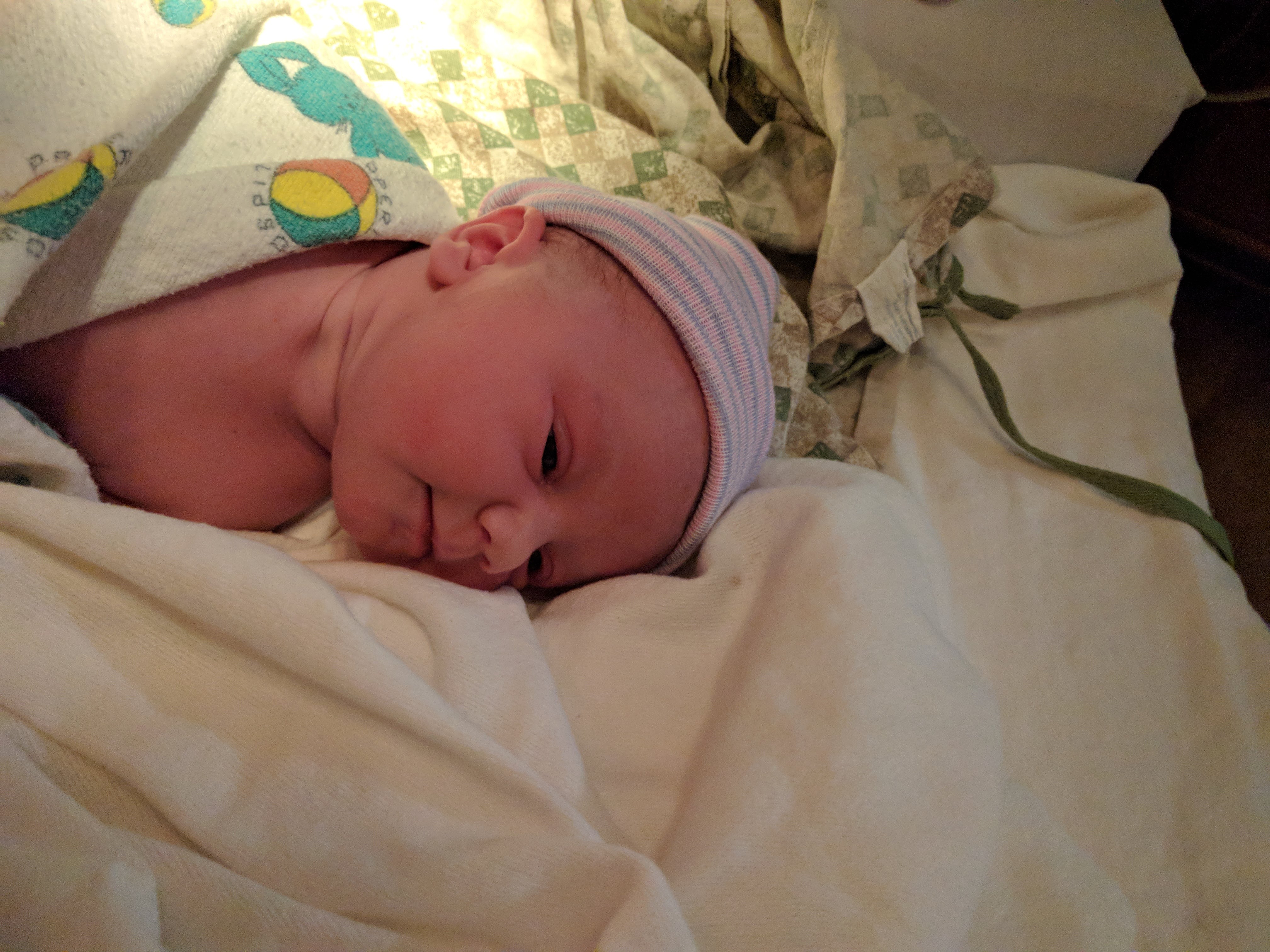 It’s always a surreal moment. Suddenly, the pain that I thought would never end instantly subsides and a baby appears in the doctor’s hands. Everything happens in a blur. He turns her over and I catch my breath, waiting for her first cry. He lifts the baby up to my chest and she is all warm and wrinkly and slimy wet.  Then they are asking David if he wants to cut the cord and I see them hold it out and he cuts it. They are rubbing her off with towels and wrapping the sheets around us both. A tiny hat is placed on her head and I’m looking over the bed rail at my husband, catching his eye and smile in this once in a lifetime moment. Those first two hours in the delivery room are so precious as we meet our baby and she meets us. 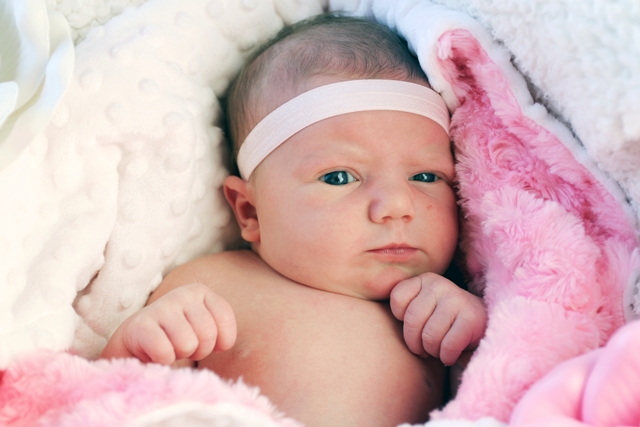 It’s always a little hard to put all the emotions into words. Its a jumble of relief that labor is over and the wait is done, mingled with the excitement of holding our brand new little one and the awe of the journey we’ve just been on. It feels hard to believe that she is finally here after all the anticipation but at the same time, it’s somehow hard to believe there was a time without her being here. There is a deep sense of contentment that this tiny person is meant to be in our family. It feels so surreal and yet so normal at the same time. There is nothing else in the world like those first newborn moments. 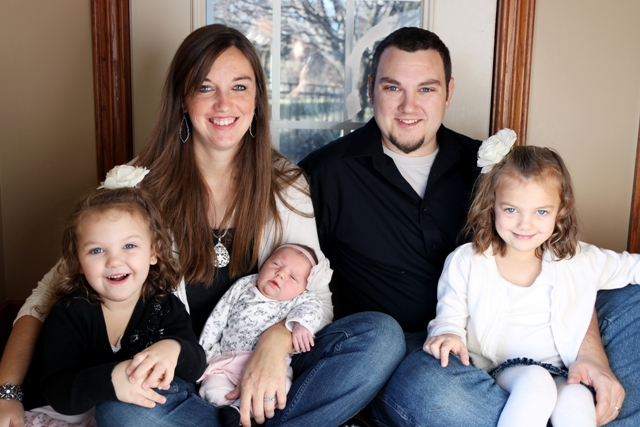 We named her Moriah Rose. Moriah was my husband’s idea after Mount Moriah in the bible where Abraham was going to sacrifice his son Isaac. God put Abraham to the test by asking him to sacrifice his only son. Abraham trusted God and passed the test. This story also serves as a prefigurement of God the Father sacrificing His only Son Jesus for our sins. The name Moriah means hill country and is associated with God’s providence. 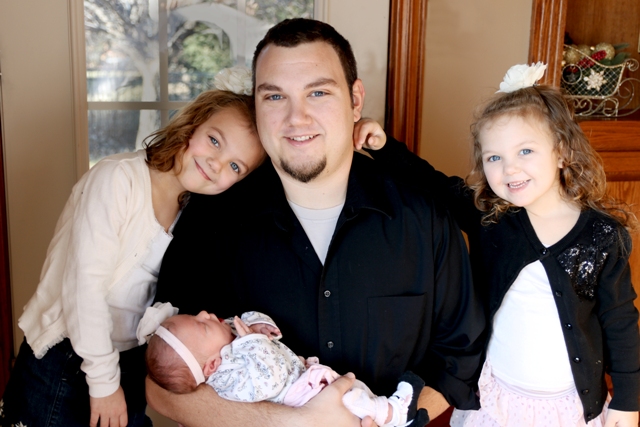 Rose is a name I have wanted to use for a long time. St. Rose of Lima is a Catholic saint so it works well as a Catholic namesake. Roses also happen to be my favorite flowers and they were what I used for my wedding so there is a special connection to them.

Here is the really neat part. When we decided to get induced, we didn’t really think about what the next day would be. But Moriah ended up being born at 1:13 in the morning on December 9th which is the Catholic feast of St. Juan Diego. He saw visions of Mary, Our Lady of Guadalupe and she asked him to gather roses on a hilltop in December. As we were sitting there in the hospital minutes after her birth, my husband was holding Moriah and suddenly he slowly said: “Roses, on a hill, in December.” As I realized what he meant a thrill went through me. 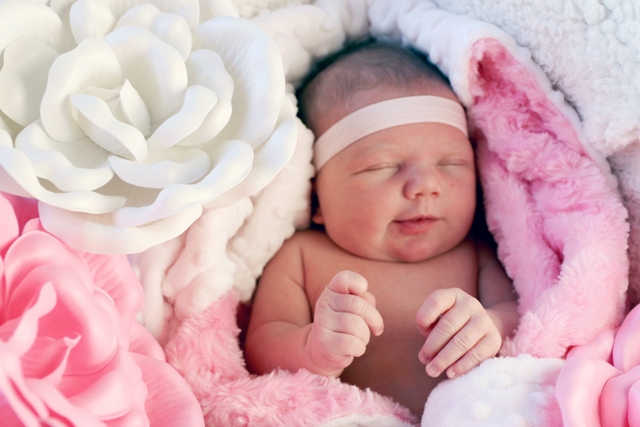 Because of the significance of St. Juan Diego’s story in connection to our baby’s name, we both felt like her being born on that day was all part of God’s plan. It was not a coincidence, it was a gift.

3 thoughts on “The Birth Story of Our Little Rose”