Sometimes there are things, little things and big things that happen that seem like more than just coincidence, little reminders that there is a God who loves us and is sending us love letters through our everyday lives.

When I was deciding whether to move my life to another state to be closer to my long-distance relationship I was praying one day in the student chapel and there was a larger-than-life Bible lying open on a stand by the altar. The chapel was still and quiet and warm. It was just me and God and as I knelt there thinking about my life and where I was meant to go and what I thought I might be called to do, I felt a stirring in my heart to go up and look at that bible.

So I rose from my knees and tiptoed up to the front of the stone chapel,  my boots softly thudding on the worn wooden floor, and there in the silence my eyes fell on Psalm 45: A Song for a Royal  Wedding. As I skimmed the page, the eleventh  verse leaped right off the paper:

“Listen, my daughter, and understand; pay me careful heed. Forget your people and your father’s house, that the king might desire your beauty.” 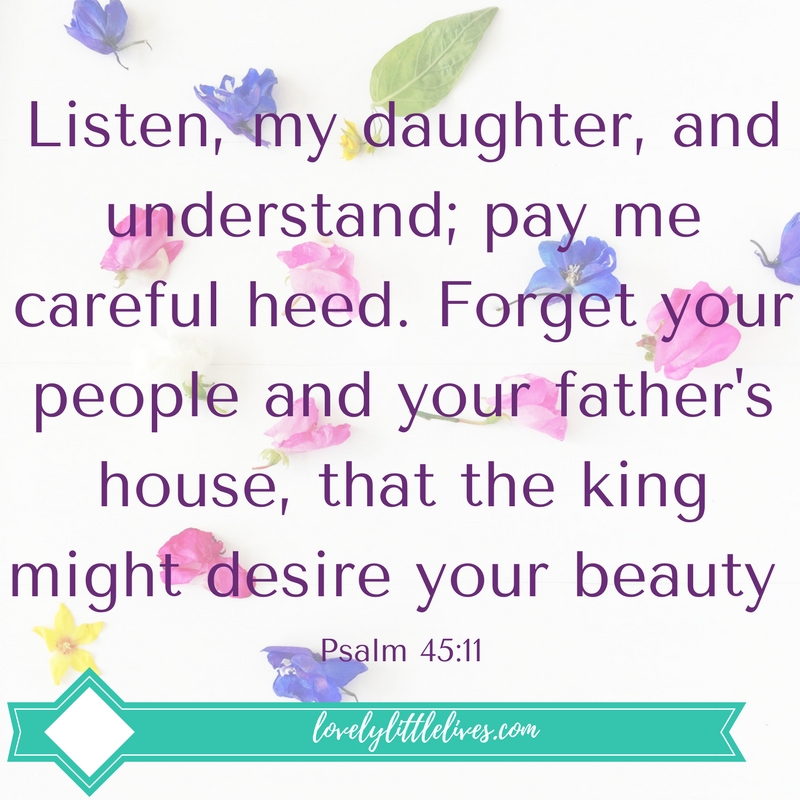 It was right there in black and white and in that moment I knew that this is what God was asking me to do. To leave my home, my friends, my family and to move to a place where I could create a life with someone who I would spend the rest of my life with. Where I could live near him, see him in between university classes, become acquainted with his friends and family, accustom myself to his home state, become a die heart fan of his beloved college team and say yes to his proposal on the top floor of one of the tallest buildings downtown.

For to me, he is the “most handsome of men, fair speech has graced his lips, for God has blessed him forever” which by the way is a line from the exact same psalm!

So I  did it, I took the plunge, I applied to his university, got a transfer scholarship, and packed up my life and moved fifteen hours away the very next semester.  It was terribly hard at first. I was homesick, I worked three jobs, I got lost in an unknown city. I only knew him and his family, I was missing out on all my family activities and high school siblings’ sports games back home, the winters were bitter cold with wind like I had never experienced, and the summers were densely hot. But I was at peace because I knew that this was where I was meant to be.

His name means beloved and mine means graceful and our first initials together create the abbreviation for high definition. How can you beat highly defined beloved grace? (An inside joke but a still true statement, you can’t make this stuff up!)

Recognize the little reminders that there is a God who loves us and is sending us love letters through our everyday lives.Click To Tweet

When I walked down the aisle two years later in the student chapel that had become MY new chapel,  I was continuing what that same Psalm 45 reads in verse 14 and 15: “All glorious is the king’s daughter as she enters, her raiment threaded with gold; in embroidered apparel she is led to the king.” I will always remember that moment when I took a deep breath, the doors were flung open and I walked past a blur of familiar faces towards the one face I had been waiting to see at the other end of the aisle for six years.

Ever since we met so long ago in that sweaty leather smelling stable and I saw his deep blue eyes smiling at me, I had that strange subconscious sense (which I didn’t quite recognize at the time), that this was the one person picked out for me from all eternity, the one person who I was supposed to know the rest of my days.

He is the one who would get a Jones soda bottle top that read “You are heading in the right direction” while mine said: “Now is the time to set priorities.” (That was the summer before I moved out here when we were actively talking and praying about the next step in our relationship).  He is the one who married me and gave me two beautiful little girls that have his blue eyes and curly hair, a personal request that I hinted at to God a thousand times before they were born. 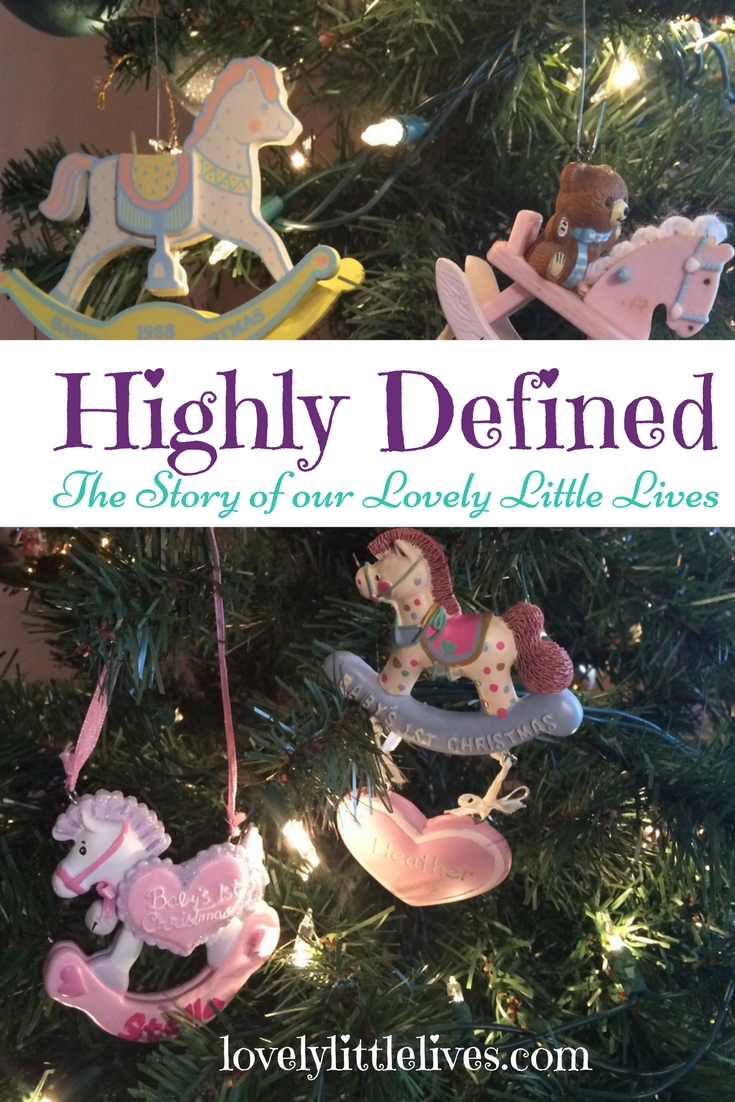 Our first Christmas tree together in our little two bedroom duplex had two rocking horse ornaments on it and a brown star with Baby scrawled across it. Our next Christmas tree had three rocking horse ornaments, the third was a white horse with a pink heart and now we have a fourth rocking horse, also pink and white, hanging from the branches between silver balls and gold spangles. We are building a herd of horses and it all began with those blue eyes in the horse stable.

As hard as those first few years were living out here in a different place, like all changes, adjustment comes slowly and when it comes it usually stays. I became familiar with the area, I made friends and now being a mom and having an established family with a house and a parish church,  it has been even easier to make friends with playgroups and church organizations and the growing families that started as single college friends. We actually have more in common with our friends now that we are all raising kids and cultivating marriages and I wouldn’t trade my life here for the world.

All of this because I started working as a horse trail guide at a summer camp twenty minutes from home the same year a high school football player came fifteen hours to volunteer his summer.

Since the time we were nine, we had been twenty minutes apart every summer but I had never attended the summer events until I started working there at sixteen while his family had been attending for years. He could have been scheduled for any number of jobs but they chose to put him on horses for the summer.

For twelve weeks instead of seeing him in passing, (as I did many of the other volunteers), I saw him every day. We painted fences together, drove around bumpy roads hauling horse equipment in the back of pickup trucks, we rounded up and saddled horses together, we trimmed trails together, raced horses across fields and through woods together,  I taught him basic riding skills as he rode around me sitting on a hay bale.

We became best friends with a shared love of cherry coke and climbing trees. And when the days began to shorten and he had to go home, he left his red Nebraska hat for me which I kept and wore to my first Nebraska football game with him a mere two years later.

Now we attend games as alumni and our little girls chant “Go Big Red” as true Nebraska natives. They play with the little sons of our college friends and we joke about matching up our kids someday when they all attend the University of Nebraska. Our girls look forward to visiting the Familyland camp every summer and riding the ponies led by sixteen-year-old boys who are doing just what their Daddy did years ago when he met their Momma.

Both my girls have already acquired a serious love of horses and have sat on a full-sized horse without any fear.  Our little flower (Heather)  and our little star (Stella) are living up to their namesakes and being a wild beauty and soft twinkle in the life of highly defined beloved grace.

Truly, if you just look at the meaning of our names, as sentimental as it may seem, it’s no coincidence we were meant to be a family,  brought together by horses. Those horses are now represented on our Christmas tree by colorful figurines celebrating each of our birth years.

Our tale has quite the creative Author, chiseling out the coherent story of our lives year by year, and that author is certainly not me.